What You Should Know About Executive Compensation

Salary negotiations are usually straightforward. After a successful interview, an offer is made and then the new hire and employer negotiate in a certain range until both parties are happy. Talks typically center around a salary number. A lot of employers have taken to posting salaries more openly because information is freely available online or they don’t want the hassle of the back and forth. Arranging compensation packages for executive-level hires is very different from middle management or entry-level employees. Executive compensation often has multiple source of performance-based income, as well as other a-typical benefits. An expert law firm is a great source for helping companies navigate the waters of executive compensation. The Woodall Law Firm PLLC has a great deal of experience crafting successful c-suite and other executive packages.

As previously stated, executive-level hires are looking for more than just a base salary. Their compensation often involves stock awards, memberships, access to travel benefits and other perks. Not all executive compensation packages are pay-related. Some executives want to know what potential future opportunities for advancement lay in store if they join a company. Executives, after all, are usually very ambitious. They want to make sure their future has options laid out. There may be some aspect of the company’s work they want to focus on, or to drive growth in a new area. All of these are commonly negotiated issues in executive compensation.

Most of the time each of these perks, income, and career growth are discussed separately. It can be a complex negotiation that takes time and legal advice. If the company is publicly-traded, then all executive compensation materials need to be made publicly available, an important consideration while negotiating.

Listed below are some common features of executive compensation packages: 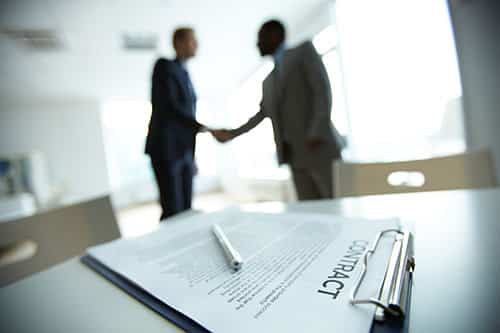 Salary- Base salary is frequently the starting point. How much will an executive’s base salary be and how much bonus they can expect are discussed. Bonuses can be individual performance-based or tied to company performance. How salary and bonuses are structured can be different for each executive.

Stock Options- Stop options are another way to incentivize executives to stay at a company and to surpass performance targets. Stock options allow someone to purchase stock in the company within a certain price range. They typically vest on a schedule that is negotiated.

Retirement Compensation- Many executives want to make sure they have benefits in place after they leave the company. This part of the negotiation helps executives make sure companies are committed to them as well. Executives that get massive payouts after being fired or poor performance (referred to as “golden parachutes”) are the exception rather than the norm. Retirement packages can also be a tool for companies to ward off potential hostile takeovers because it would drive the company’s price too high.

Deferred Compensation- This relates to payment set for a future date usually tied to tenure or performance benchmarks.

Flexible Scheduling- This is a general agreement around the time an executive will be on site. It involves vacation and other obligations an executive might have.

Other Perks- Deals with any other perks in a contract.

The professionals at The Woodall Law Firm PLLC can help you prepare and conduct executive compensation negotiations so you can attract top level talent and best protect the interests of your company.